Okay, so hey everyone, it’s been a hot minute since many of you have seen or even heard from me. I missed you all so much!❤️Do you all remember me?!😂

Anyway, it is such a relief to be back to blogging. For those who weren’t aware, I had a long five month break in which I just needed time to catch up with my schoolwork, see friends, and get through my massive reading slump (which still isn’t completely cured, haha).

Before we start the review I have for you today, I would like to give you all a few updates about my life…

Alrighty, I hope you guys enjoyed hearing what I’m up to and hearing that I haven’t become a ghost lurking in the blogosphere. Now, let’s get on with the review! 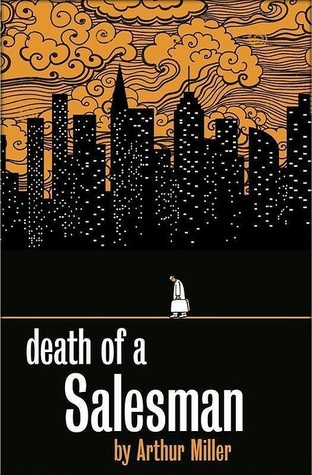 Title: Death of a Salesman

‘For a salesman, there is no rock bottom to life. He don’t put a bolt to a nut, he don’t tell you the law or give you medicine. He’s a man way out there in the blue, riding on a smile and a shoeshine.’

Willy Loman has been a salesman for 34 years. At 60, he is cast aside, his usefulness now exhausted. With no future to dream about he must face the crushing disappointments of his past. He takes one final brave action, but is he heroic at last, or a self-deluding fool?

My lucky English class got out of reading Shakespeare this year! Although it isn’t the language that is a problem, the themes of Shakespeare’s plays never seem to resonate deep within me. Instead of Shakespeare, which my English teacher claimed to be very sick of, he decided to spend the play unit of this semester studying Death of a Salesman, a classic play taking place in the 1940s. Though I had never heard of it before he mentioned it, it is definitely a worthy play to read that is possibly lesser known by the current generation. Was it my cup of tea? Meh. But still, better than Shakespeare by miles.

Death of a Salesman centres around 60-year old Willy from Brooklyn, New York. He has raised two grown boys, but both are very unsettled. He has also been working as a businessman for upwards of thirty years, but his success in the field has been dwindling. His American Dream is shattered and he has lost almost all hope for his future. Will he end up finding a diamond-in-the-rough event to keep him going, or will he lose it all and leave it up to his loving wife and boys to deal with their lives on their own?

From the beginning, readers see how troubled protagonist Willy Loman is. His job as a salesman is faltering, and he is not on the best terms with his co-workers, nor his sons. One thing that is noticed very early on in the play is his tendency to have ‘visions of the past,’ reminiscing of times when he had more success. As I read, I really felt sorry for Willy. I also have a tendency to get very nostalgic at times, especially when under stress, during which my mind wanders back to much simpler times from my childhood. I liked that Willy was so real- he had his strengths, but he also had his flaws. He was constantly searching for meaning in his life, which is the sweet spot I find that many authors seem to miss when writing their characters.

“You can’t eat the orange and throw the peel away – a man is not a piece of fruit.” (Miller)

Linda, Willy’s wife, was a stereotypical 20th-century mother and wife. She was very loyal and supportive of her sons and her husband, often emphasizing that she and Willy were a team, which was proven when she told her boys that if they disliked Willy, they would have to dislike her as well. Besides this, there honestly wasn’t anything too unique about her. In a year from now, I suppose I’ll remember her name and maybe a bit of what she stood for. Not much else.

“Sometimes…it’s better for a man just to walk away.
But if you can’t walk away?
I guess that’s when it’s tough.” (Miller)

Willy’s adult age sons, Biff and Happy, are both unemployed and unsettled. Since Willy really wanted Biff to follow in his footsteps, he is especially disappointed in him throughout the play, and there is a rift between them. Happy has his own problems as well; being embarrassed to be seen with his father as he does not want to take any responsibility for his needs. Honestly, the two of them could have been much better sons.

There were many prevalent themes and symbols in this play, which added lots of meaning to it. The play explored the meaning of the American Dream in the 1940s, which was a fragile time throughout the world, both in the case of economics and humanities. I found it very interesting to get a glimpse into what the business world was like in the 40s as well as how people interacted with each other. Along with this, the play explored father and son bonds, abandonment and betrayal, and nature vs. city, amongst many symbols such as a flute, stockings, and seeds. These symbols made the play a touch more interesting and symbolic of Willy’s perils in life, foreshadowing events and showing Willy’s true emotions.

If you’re looking for a meaningful and somewhat compelling play that does not follow the boggling language of Shakespeare, Death of a Salesman is a fantastic choice. It has authentic characters, a rich storyline, and lots of symbolic metaphors to keep readers captivated. It wasn’t of complete interest or relevance to me personally, but on the objective side, this play is a gem and is like no other. If you’re captivated by a symbolic view of the 1940s and don’t mind a book written in a play format, you’ve found your new match.

4 thoughts on “Guess Who Decided to Show Up Again?! // Updates and Death of a Salesman Review”