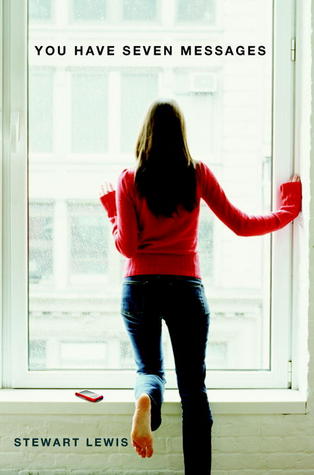 Title: You Have Seven Messages

It’s been a year since Luna’s mother, the fashion-model wife of a successful film director, was hit and killed by a taxi in New York’s East Village. Luna, her father, and her little brother, Tile, are still struggling with grief.
When Luna goes to clean out her mother’s old studio, she’s stunned to find her mom’s cell phone there—charged and holding seven unheard messages. As Luna begins to listen to them, she learns more about her mother’s life than she ever wanted to know . . . and she comes to realize that the tidy tale she’s been told about her mother’s death may not be the whole truth.

How I Found Out About It: By browsing through the shelves at the library

Grief is not a new topic in YA fiction. In probably at least half of the contemporaries I read, the protagonist is dealing with some type of grief, whether it be a deceased parent or grandparent, a friend moving away, or divorced or missing parents. Nevertheless, when I was checking out some of the books at my local library, this one caught my eye and seemed like it would be a captivating mystery story involving grief with immense character development.

Even though I did see some undeniable flaws in this novel, I think that it’s pretty safe to say that I thoroughly enjoyed it. I didn’t think that the concept and protagonist were mind-blowingly unique, but I really appreciated the morals and writing style this book offers.

You Have Seven Messages basically follows a teenage girl named Luna. A year ago, her mother, who was a model, was killed by a taxi on the streets of New York. One day, Luna decides to go through her mom’s old studio and finds her old cellphone. She notices that seven messages had been left, and intrigued, she decides to listen to them. Little did she know that each one leads her to somewhere different and helps put together the puzzle pieces of her mom’s rather mysterious and sudden death.

I believe that Luna was an okay protagonist, but in my opinion she was also pretty average and forgettable. One thing I have to mention is that although she was 15 in the story, she sounded a bit more juvenile than that- maybe around the 12 or 13 year old range. Most 15 year olds I know are much more mature than her character was, and this bothered me a bit.

Plot-wise, You Have Seven Messages is not the most unique thing I’ve read, either. If you want me to be completely honest, grief is so overdone in books, and this book’s portrayal of grief simply wasn’t one that really stood out. In spite of this, I enjoyed following the mysteries that Luna unraveled about her mom’s death and seeing her grow as a person, as well.

Overall, this was a good story about learning to let go and move on from tragedy, and also knowing that the person you miss is still inside of you somewhere, waiting to emerge. If you enjoy mystery novels revolving around grief and character development, You Have Seven Messages is calling your name. You may not fall in love with the protagonist, but the mystery and morals are too good to be overlooked.