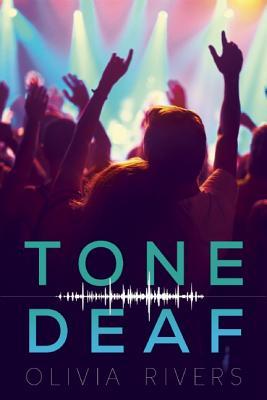 His world is music. Her world is silent.

Ali Collins was a child prodigy destined to become one of the greatest musicians of the twenty-first century—until she was diagnosed with a life-changing brain tumor. Now, at seventeen, Ali lives in a soundless world where she gets by with American Sign Language and lip-reading. She’s a constant disappointment to her father, a retired cop fighting his own demons, and the bruises are getting harder to hide.

When Ali accidentally wins a backstage tour with the chart-topping band Tone Deaf, she’s swept back into the world of music. Jace Beckett, the nineteen-year-old lead singer of the band, has a reputation. He’s a jerk and a player, and Ali wants nothing to do with him. But there’s more to Jace than the tabloids let on. When Jace notices Ali’s bruises and offers to help her escape to New York, Ali can’t turn down the chance at freedom and a fresh start. Soon she’s traveling cross-country, hidden away in Jace’s RV as the band finishes their nationwide tour. With the help of Jace, Ali sets out to reboot her life and rediscover the music she once loved.

In addition to reading books, I love listening to music. I find that both activities make me happy and I can thus never pass up on seeing the two of them together. A fluffy romance book all about music that is full of diversity? Please count me in!

Just like I anticipated, I loved Tone Deaf! Although at times it got more serious, it was happy and lighthearted enough to transmit those positive vibes to me. I am exuberant to read more from the amazing Olivia Rivers!

To synopsize, this story revolves around two teens named Ali and Jace. Because of a brain tumour, Ali has gone deaf, and this stops her from being passionate about music. She ends up winning a backstage pass to see a popular band called Tone Deaf, which Jace is a part of. Admittedly, his reputation isn’t the most positive, and Ali is turned off by him from the start. But Jace understands where she’s coming from, and so he decides to take her with him during the rest of the band’s tour. Will Ali warm up to Jace and learn to love music again?

The two protagonists of this story were very pleasant to read about, and they made the novel the gem that it honestly is. Ali was such a sweetheart! I felt so bad for her regarding all the obstacles that she’d had to go through at only 17 years old, but in retrospect, she was actually extremely lucky. How many average joe people get to meet and form relationships with celebrities? Not many, and even though at first she was notably reluctant to meet Jace, I loved how the two meshed. Speaking of Jace, he was super cool and hip and I just loved him, even in spite of all the controversy that there was regarding him in the novel.

I also feel like raving about this book’s premise and plot- both were amazingly crafted! I could hardly put this book down while reading; I was literally so mesmerized. The premise itself was also very unique and unlike that of most books in the world, and I really, really appreciated that.

If I were to compare Tone Deaf to one other book, then it would be Open Road Summer by Emery Lord. Both books are full of awesome music, friendship, cute romance, and great characters, so if you liked one of the two, you’ll for sure devour the other. To sum it all up, I loved pretty much everything about this book, and I can almost guarantee that anyone who gives it a try will have a lot of fun with it!