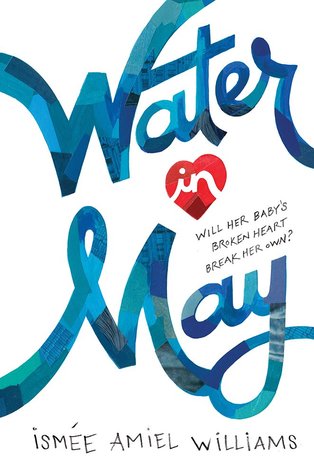 Title: Water in May

Fifteen-year-old Mari Pujols believes that the baby she’s carrying will finally mean she’ll have a family member who will love her deeply and won’t ever leave her—not like her mama, who took off when she was eight; or her papi, who’s in jail; or her abuela, who wants as little to do with her as possible. But when doctors discover a potentially fatal heart defect in the fetus, Mari faces choices she never could have imagined.

Surrounded by her loyal girl crew, her off-and-on boyfriend, and a dedicated doctor, Mari navigates a decision that could emotionally cripple the bravest of women. But both Mari and the broken-hearted baby inside her are fighters; and it doesn’t take long to discover that this sick baby has the strength to heal an entire family.

Inspired by true events, this gorgeous debut has been called “heartfelt, heartbreaking and—yes!—even a little heart-healing, too” by bestselling YA novelist Carolyn Mackler.

Source: Thanks so much to ABRAMS Kids for providing me with an e-ARC of this book!

How I Found Out About It: Netgalley

Truthfully, I often avoid contemporaries like this. They can tend to be saddening, so I usually stick to the fluffier ones. But the synopsis of this book got me curious, so I knew that I had to read it to see what happens.

Water in May ended up being fabulous! It both broke and touched my heart in all the best ways, and I felt like I could really feel a raw emotional connection to this story.

For a brief synopsis, this book follows the perspective of a girl named Mari. She is only fifteen, but has gotten pregnant with the help of her boyfriend in the hopes of finally feeling appreciated by a family member. For Mari, all is good until she finds out that her baby has a heart defect that could affect its life in the most negative of ways. How will she deal with this so everyone in her life benefits?

Protagonist Mari was honestly such a good character. She was so triumphant and always pushed through her struggles, and instead of feeling ashamed that she was pregnant with an unhealthy fetus at 15, she learned to embrace and appreciate it. Even though it is not typically accepted to become pregnant at such a young age, I was able to sense that Mari only had the best intentions in doing so. The one fault I had with this book, though, was that her family members were unrealistically happy for her when she became pregnant. Shouldn’t we expect anger?

The plot was pretty average, but that’s okay. It was definitely existent with smoothly executed events that pulled my heartstrings, and I don’t expect much more than that.

To conclude, Water in May was absolutely unlike anything I’ve ever read before. It made me feel the kind of strong emotional connection that I almost never feel when reading books. If you are the type of reader who enjoys contemporaries that shatter your heart and then mend it back together again, then this book is for sure the best match for you!

*I received a digital ARC of this book via Netgalley in exchange for an honest review.*

3 thoughts on “ARC Review: Water in May”