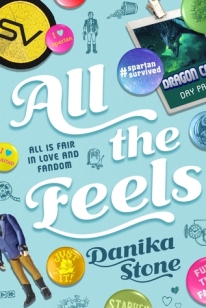 Title: All The Feels

College freshman Liv is more than just a fangirl: The Starveil movies are her life… So, when her favorite character, Captain Matt Spartan, is killed off at the end of the last movie, Liv Just. Can’t. Deal.

Tired of sitting in her room sobbing, Liv decides to launch an online campaign to bring her beloved hero back to life. With the help of her best friend, Xander, actor and steampunk cosplayer extraordinaire, she creates #SpartanSurvived, a campaign to ignite the fandom. But as her online life succeeds beyond her wildest dreams, Liv is forced to balance that with the pressures of school, her mother’s disapproval, and her (mostly nonexistent and entirely traumatic) romantic life. A trip to DragonCon with Xander might be exactly what she needs to figure out what she really wants.

All The Feels was such an adorable, fluffy contemporary book- to me, it felt like Fangirl and The Geek’s Guide to Unrequited Love combined, and I really liked both books! As well, of course, this book has some of its own unique flair, too.☺️

When I saw this cutie on a shelf in the library, I couldn’t help but pick it up; the cover was too cute to resist, as was the synopsis. And I’m very glad I did!😄

For a quick summary, this book revolves around Liv, who is a freshman in college. She is IN LOVE with the Starveil movie series, and when Captain Matt Spartan, her ultimate favourite character, dies, she is wretched. She’d do anything to bring him back to life… so with her friend Xander, she endeavours on a campaign to try to get the creators of the Starveil movies to bring him back. The two even go to DragonCon together to get closure. But the fangirling and mourning can’t go too far, or else Liv will have to make some important sacrifices…

I mostly enjoyed the storyline of this book, but in my opinion, the characters as wholes were just okay. I did see flaws as well as good things in all of them, though, so that’s a positive!😉

I felt pretty bad for Liv when she went through all her struggles. I could totally understand the grief she went through, even though Captain Matt Spartan was only a fictional character. I do think she went a bit overboard with it, though- she let it take over her life. If I were Liv, then I would probably have gone to see a therapist or talked to someone who could help me get through the grief, but she stubbornly refused, which, in a way, is to be expected. I do think that she could’ve tried to look more at the big picture, instead of mourning over a fictional character’s death 24/7.

Xander was a great guy, and I think I liked him a bit more than Liv. He was helpful and trustworthy, which are two things I really look for and admire in book characters. He wasn’t even interested in the Starveil movies, but he still generously went out of his way to help Liv in a time of sorrow!

There was quite the plot twist close to the end, resulting in a big shocker. Avoiding spoilers, I won’t go into it, but let’s just say that I was pretty surprised, as you’ll probably be, too, if you read this book!

All in all, I wish I could say that this book gave me all the feels, but it didn’t, really. It was mostly Liv who went through all those feels, hence the book’s title. Anyway, this story was quite fluffy and a good break from most of the dark sci-fi novels I’ve recently been reading. If you’re a fangirl at heart who mourns over deaths of favourite characters, or someone who is simply just looking for a fluffy contemporary to make your day, then this book is for you!

5 thoughts on “All The Feels Review”