This review is in tribute to Gene Wilder, the lovely, talented man who played Willy Wonka in the original movie. Unfortunately, he passed away yesterday (August 29th, 2016). RIP 💔

Before we get to the review today, I just wanted to tell you guys that I have been starting to volunteer at my local Indigo store! I have been able to shelve incoming books and I will be helping to set up some events in the near future. Thanks so much for the opportunity, Heather Reisman and everyone else at Indigo Headquarters!😊 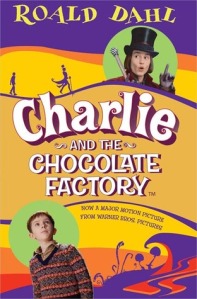 Title: Charlie and the Chocolate Factory

But only five lucky children will be allowed inside. And the winners are: Augustus Gloop, an enormously fat boy whose hobby is eating; Veruca Salt, a spoiled-rotten brat whose parents are wrapped around her little finger; Violet Beauregarde, a dim-witted gum-chewer with the fastest jaws around; Mike Teavee, a toy pistol-toting gangster-in-training who is obsessed with television; and Charlie Bucket, Our Hero, a boy who is honest and kind, brave and true, and good and ready for the wildest time of his life!

How I Found Out About It: Who doesn’t know about this book?😂

The movie for Charlie and the Chocolate Factory has been a childhood favourite for me, as it always makes me happy. If you know me, then you know how much I LOVE chocolate, and just seeing it all over the place during the movie just made me so hungry! So when I saw the book at my public library, I snatched it up, and ate up it like I do a KitKat! ()

For those who don’t know what this story is about, it revolves around a young boy named Charlie Bucket, who can only have chocolate once a year; on his birthday. Despite that, he really loves eating it, and will do anything to have just one more. His parents aren’t much help, and his grandparents are very weak, so they are always in bed. When it is announced that the famous Willy Wonka was to open up his factory to a few lucky kids, Charlie got so excited, and knew that he NEEDED to have more candy bars. The catch was that out of millions and millions of chocolate bars, only 5 of them had golden tickets that would enable him to visit the factory. Will Charlie be able to find a golden ticket, and visit the factory like he dreams to?

I really liked Charlie, and how determined he was. Even though he knew his family did not want him eating too much candy, he still risked everything to follow his dreams, and did not give up even after many ticketless chocolate bars. Though this isn’t always the ethical thing to do, I still really liked to see a character following his dreams. Charlie was such a well-behaved boy, and I knew that in the end, he definitely got what he deserved. (I don’t want to spoil it for those who haven’t read or seen it!)

I could see the good in all the other kids who got the golden tickets, but what I didn’t like was that they were pretty much portrayed as stereotypically bad kids. For instance, Veruca Salt as most people know is pretty selfish, and seems to want anything and everything of ever. As the reader, even though I could see that she was a determined person at heart, Dahl mostly wrote about her like she was stuck-up and cruel. This is not to say that characters can’t have their flaws, I’m just saying that their good side should be able to shine through, too. But after all, I think that’s just the fun of the story. Don’t let that make you weary of reading it, because the story is still amazing, super warm-hearted and fun!

Overall, I could easily visualize some of the scenes from the movie while reading this book, and nothing too much changed from book to movie. Charlie and the Chocolate Factory was really witty and fun with very in-depth characters, and I could definitely see why it’s seen as a classic. I think anyone could read this and have a good time.

5 thoughts on “Charlie and the Chocolate Factory Review”