Anyway, today I will be listing some light, contemporary reads good for summertime, inspired by this week’s Top Ten Tuesday post hosted by The Broke and the Bookish! So let’s get started! (Synopsises come straight from Goodreads)

Amy Curry is not looking forward to her summer. Her mother decided to move across the country and now it’s Amy’s responsibility to get their car from California to Connecticut. The only problem is, since her father died in a car accident, she isn’t ready to get behind the wheel. Enter Roger. An old family friend, he also has to make the cross-country trip – and has plenty of baggage of his own. The road home may be unfamiliar – especially with their friendship venturing into uncharted territory – but together, Amy and Roger will figure out how to map their way.

This is a light, summery read all about two teenagers going on a road trip across America! I’d highly recommend it, as it does not really cover many dark topics!

Eleanor… Red hair, wrong clothes. Standing behind him until he turns his head. Lying beside him until he wakes up. Making everyone else seem drabber and flatter and never good enough…Eleanor.

Park… He knows she’ll love a song before he plays it for her. He laughs at her jokes before she ever gets to the punch line. There’s a place on his chest, just below his throat, that makes her want to keep promises…Park.

Set over the course of one school year, this is the story of two star-crossed sixteen-year-olds—smart enough to know that first love almost never lasts, but brave and desperate enough to try.

Eleanor & Park was just amazing, and I would’ve loved to read it on a beach! This book made me so happy, what with the adorable romance and amazing writing style! Check out my review for it here!

ONE SUMMER in the French countryside, among sun-kissed fields of lavender . . .

ANOTHER SUMMER in upstate New York, along familiar roads that lead to surprises . . .

When Summer Everett makes a split-second decision, her summer divides into two parallel worlds. In one, she travels to France, where she’s dreamed of going: a land of chocolate croissants, handsome boys, and art museums. In the other, she remains home, in her ordinary suburb, where she expects her ordinary life to continue — but nothing is as it seems.

In both summers, she will fall in love and discover new sides of herself. What may break her, though, is a terrible family secret, one she can’t hide from anywhere. In the end, it may just be the truth she needs the most.

From New York Times bestselling author Aimee Friedman comes an irresistible, inventive novel that takes readers around the world and back again, and asks us what matters more: the journey or the destination.

This is one of THE best summery books I’ve ever read! For those who like using books to practically travel around the world, this one will bring you to NYC, France, and back again! Check out my review for it here!

Greg Heffley and his family hit the road in author-illustrator Jeff Kinney’s latest installment of the phenomenally bestselling Diary of a Wimpy Kid series.

For avid middle grade readers or just the natural graphic novel lover, any book in the Diary of a Wimpy Kid series would be amazing for the summer, and will have you laughing your head off! I chose this one especially because it takes place during summertime, and like Amy & Roger’s Epic Detour, it includes quite an eventful road trip as well!

Wealth, privilege, and way too many pastel-tinted opinions…that’s Carly’s life. And guess what? It’s. Getting. On. Her. Nerves.

Carly wants to be real, and she’s always counted on her little sister, Anna, to love her and support her—and tell her how right she is. But when Anna turns “hot” over the course of a single summer, everything goes weird. Suddenly Anna’s swimming in the deep end with the big girls—while Carly watches, hurt, from the kiddie pool. And of course there are boys involved, complicating things as boys always do.

Peace, Love, and Baby Ducks (by Lauren Myracle) is just perfect for the summer! You can tell by the cover and the title that it’s just a light-hearted, funny read! Honestly, anything by her goes. For younger readers, maybe try The Winnie Years series. I haven’t read all the books, but the rest of the series still seems really light!

Anna is looking forward to her senior year in Atlanta, where she has a great job, a loyal best friend, and a crush on the verge of becoming more. Which is why she is less than thrilled about being shipped off to boarding school in Paris–until she meets Étienne St. Clair. Smart, charming, beautiful, Étienne has it all…including a serious girlfriend.

But in the City of Light, wishes have a way of coming true. Will a year of romantic near-misses end with their long-awaited French kiss?

For those just wanting a sweet, cute romance read taking place in the beloved city of lights, this is your book! This is one of my absolute favourite books, and you will not regret it if you read it as well! Find my review here!

Carmen got the jeans at a thrift shop. They didn’t look all that great: they were worn, dirty, and speckled with bleach. On the night before she and her friends part for the summer, Carmen decides to toss them. But Tibby says they’re great. She’d love to have them. Lena and Bridget also think they’re fabulous. Lena decides that they should all try them on. Whoever they fit best will get them. Nobody knows why, but the pants fit everyone perfectly. Even Carmen (who never thinks she looks good in anything) thinks she looks good in the pants. Over a few bags of cheese puffs, they decide to form a sisterhood and take the vow of the Sisterhood of the Traveling Pants . . . the next morning, they say good-bye. And then the journey of the pants — and the most memorable summer of their lives — begins.

This book takes place over the course of one summer, and includes POVS of four best  friends. I honestly did not finish the second book in the series because it just went over my head, but I still adored this one!

Sunny Lewin has been packed off to Florida to live with her grandfather for the summer. At first she thought Florida might be fun — it is the home of Disney World, after all. But the place where Gramps lives is no amusement park. It’s full of . . . old people. Really old people.

Luckily, Sunny isn’t the only kid around. She meets Buzz, a boy who is completely obsessed with comic books, and soon they’re having adventures of their own: facing off against golfball-eating alligators, runaway cats, and mysteriously disappearing neighbors. But the question remains — why is Sunny down in Florida in the first place? The answer lies in a family secret that won’t be secret to Sunny much longer. . .

Here’s another one for you, middle grade and/or graphic novel lovers! This book was not my favourite, but it was still so cute and sweet! It does cover a bit of a sensitive topic (I won’t say it because then that would spoil the ending), but they portray it in such a light way! 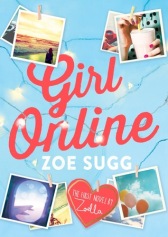 I had no idea GirlOnline would take off the way it has – I can’t believe I now have 5432 followers, thanks so much! – and the thought of opening up to you all about this is terrifying, but here goes…

Penny has a secret.

Under the alias GirlOnline, she blogs about school dramas, boys, her mad, whirlwind family – and the panic attacks she’s suffered from lately. When things go from bad to worse, her family whisks her away to New York, where she meets the gorgeous, guitar-strumming Noah. Suddenly Penny is falling in love – and capturing every moment of it on her blog.

But Noah has a secret too. One that threatens to ruin Penny’s cover – and her closest friendship – forever.

I know, I know, back at it again with Girl Online! I’m sorry, I’ll try to talk about it less in my future posts, but I just loved this duology! This series is really light and romantic, and as a bonus, it’s written by a really famous YouTuber, Zoe Sugg! Review here!

Before there was the Baby-Sitters Club, there were four girls named Kristy Thomas, Mary Anne Spier, Claudia Kishi, and Stacey McGill. As they start the summer before seventh grade (also before they start the BSC), each of them is on the cusp of a big change.

I would say that any book in this series would pass the grade for a light, summery read! The characters are light-hearted and agreeable, and some of the kids they babysit are just adorable, and will really make your day! There are enough books in this series for it not to be needed to be read in order (they introduce the club and the characters at the beginning of every book), and so you can choose one that seems the most interesting to you!

That’s it for this post! So tell me, have you read any of these books, and if so, what did you think of them? What books do you think are fluffy and light enough for the summer? Tell me in the comments below!😊