Title: The Boy in the Striped Pajamas 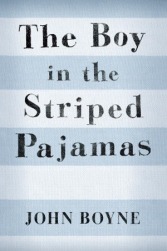 “Powerful and unsettling. . . . As memorable an introduction to the subject as The Diary of Anne Frank.” —USA Today

Berlin, 1942: When Bruno returns home from school one day, he discovers that his belongings are being packed in crates. His father has received a promotion and the family must move to a new house far, far away, where there is no one to play with and nothing to do. A tall fence stretches as far as the eye can see and cuts him off from the strange people in the distance.

But Bruno longs to be an explorer and decides that there must be more to this desolate new place than meets the eye. While exploring his new environment, he meets another boy whose life and circumstances are very different from his own, and their meeting results in a friendship that has devastating consequences.

How I Found Out About It: I found it at my school library when looking for something to read, and it looked really interesting!

Review: I thought that this book was amazing! Even though Bruno was very naive about what was going on around him, he still had a ton of kindness inside, which he wanted to share. Bruno’s dad worked for Hitler so their family had to move from Berlin, Germany to Poland, where there were a lot of nasty concentration camps for the Jews to be tortured and treated very poorly. Bruno did not really know about the war, and/or what was going on behind the tall wall near his house. He really wanted to see, but he was told that it wasn’t very pretty. He then met a boy named Shmuel, when he was out playing one day. They really bonded and became great friends, even though Bruno was a Christian and Shmuel was a Jew. I loved how this book encourages race equality, especially while being under the control of a soldier! Bruno was very inclusive and did not care about Shmuel’s differences, and he was not scared to be a friend to someone who was a little different from himself, which I admire about him. He had to face a very tough decision of whether or not to talk to the boy, and he still risked his life and did it. I would DEFINITELY recommend this book!

One thought on “The Boy in the Striped Pajamas Review!”